New York City can be a tough place for mermaids, but somehow we’ve been splashing around since 2010.

May 2010: The very first Mermaid Lagoon was held at the House of Yes and raised money to support the cleanup of the BP oil spill. 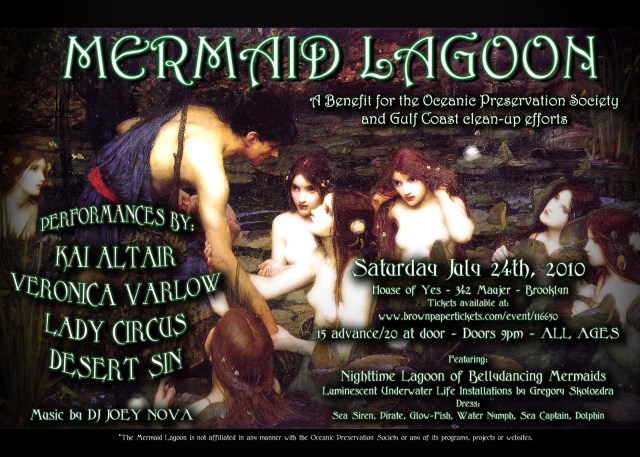 June 2011: We continued to raise money for cleaning up the gulf at a bigger event at the Red Lotus Room.

July 2012: We broadened our focus to explicitly include our fellow marine mammals and supported ORCA Peru and the Waterkeeper Alliance.

November 2013: Our hearts were broken by the story of Lolita, an orca living in captivity. We showed what it would be like to keep mermaids in captivity and force them to perform! Donations went to Orca Network, who are still fighting for Lolita’s release, and to Our Spaces, an organization that promotes good governance of the global commons.

February 2015 : We’re continuing our commitment to orcas and other marine mammals by supporting WDC. We’re also remembering our local waterways and donating to the Hudson Riverkeeper. This year’s Mermaid Lagoon will be held in honor of Antarctica Day! Circumstances beyond our control forced us to postpone the Lagoon, but we kept the polar theme anyway.